With so many different social media platforms available to us in 2021, it can be difficult to discern which ones make the most sense for your brand. Facebook, Instagram, and TikTok stand out as the giants, but might not reach the exact audience you’re looking for. Reddit, on the other hand, is a niche social media platform that’s essentially a series of forums where users can share news, content, and interact with one another. Curious how Reddit works, who it reaches, and why it may be of interest to your brand? Read on below.

Now that we know who we’re talking to, let’s dig into how Reddit actually works. This social media platform is greatly different from Instagram or Facebook in that the Reddit community is directly determining what content gets seen through voting. Posts are organized by subject into user-created subreddits, and those posts then receive a series of upvoting or downvoting from the community. Posts that receive more upvotes will appear at the top of the subreddit.

Reddit has a reputation for having an outspoken user base, which has also been classified as offbeat, quirky, and anti-establishment. Like most social media platforms, Redditors have their own abbreviations (such as “TIL,” or “Today I Learned”) and their own platform features (like “AMA,” or “Ask Me Anything” which has been adapted to other social media platforms). A user can join as many subreddits as they want, with thousands of topics to choose from. This makes the platform a desirable ad space for brands. Reddit also has powerful audience targeting tools that make it simple for a brand to get in front of the right audience.

How do you know if Reddit is the right platform for your brand? For starters, Reddit has 430 million monthly active users worldwide, so there could be a large, untapped audience for your brand to explore. Reddit is built on the idea of community, which makes it a desirable platform for brands that want to listen, learn, and foster relationships with the user base. Internet users flock to Reddit for honest product and brand reviews, but brands must provide value to its users, otherwise they run the risk of downvoting. Here are some quick stats to help you make the decision:

Some brands that have successfully mastered Reddit include Audi, Toyota, and Xbox One. Audi took advantage of both the AMA and the livestream tool, and had celebrities answer questions while speeding in Audi’s newest car. Toyota took the approach of participating on a different brand’s subreddit. They promoted a video showcasing two Supras racing on the Formula 1 subreddit. Though the content wasn’t exactly about Formula 1, it provided value relative to the community’s interest. 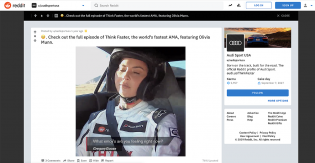 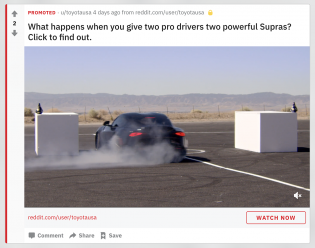 Sometimes if a brand is talked about enough, Redditors will start a subreddit to open the conversation on their own—without the brand. This was the situation in the case of Xbox One. Users started chatting about Xbox games, sharing technical questions, and offering tips, so Xbox One began regularly hosting AMAs on the subreddit, rewarding fans with exclusive content, and contributing to the community in a meaningful way.

In the ad world of Reddit, Lemonade Inc., an insurance app, made a splash by placing a promoted post in a fast food subreddit. The idea? That their insurance payments cost as much as fast food. This ad resonated with the community in an unconventional way that created engagement and provided value. 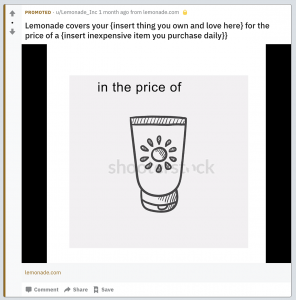 If you’re going to start using Reddit within your mix of social media platforms, be sure to do the research first. Think of content in terms of providing value to specific subreddits and be prepared to participate in the conversation. Lots of brands have seen success on Reddit, and with its huge growth last year we’re likely to see more and more of that!