How to Approach Father’s Day as a Brand in 2021

This year, 7 in 10 Americans plan to celebrate Father’s Day. That percentage seems like a lot, and it certainly is, but it also leaves about 10 million people in the U.S. who won’t be celebrating this year. People who are grieving the loss of a father, those who are estranged from their fathers, fathers who have lost a child of their own, and so many other unique situations play into why Father’s Day is painful for thousands and thousands of people each year.

As time goes on, we’re starting to see more brands understanding that “Hallmark holidays” like Mother’s Day and Father’s Day (and even celebrations like Thanksgiving and Christmas) look different for everyone—and they aren’t necessarily filled with joy.

So, with Father’s Day fast approaching, here are three questions every brand should be asking themselves about their marketing content.

Since the pandemic began, 43,000 U.S. kids have lost a parent to COVID-19—and that statistic only includes kids and only those who have lost parents to COVID, so there are certainly thousands more people who are adults and/or lost parents in other ways. It’s especially important this year to make sure your content is sensitive to these people who are grieving and might have a complicated relationship with the holiday.

One way that brands have been doing this with their email marketing is through an option that allows customers the choice to “opt out” of email communication that is specific to Mother’s Day or Father’s Day. Seeing celebratory emails in your inbox when these holidays are emotional for you can be stressful and upsetting. Many brands are hoping to make their customers feel extra comfortable this year by sending emails like the ones shown below. 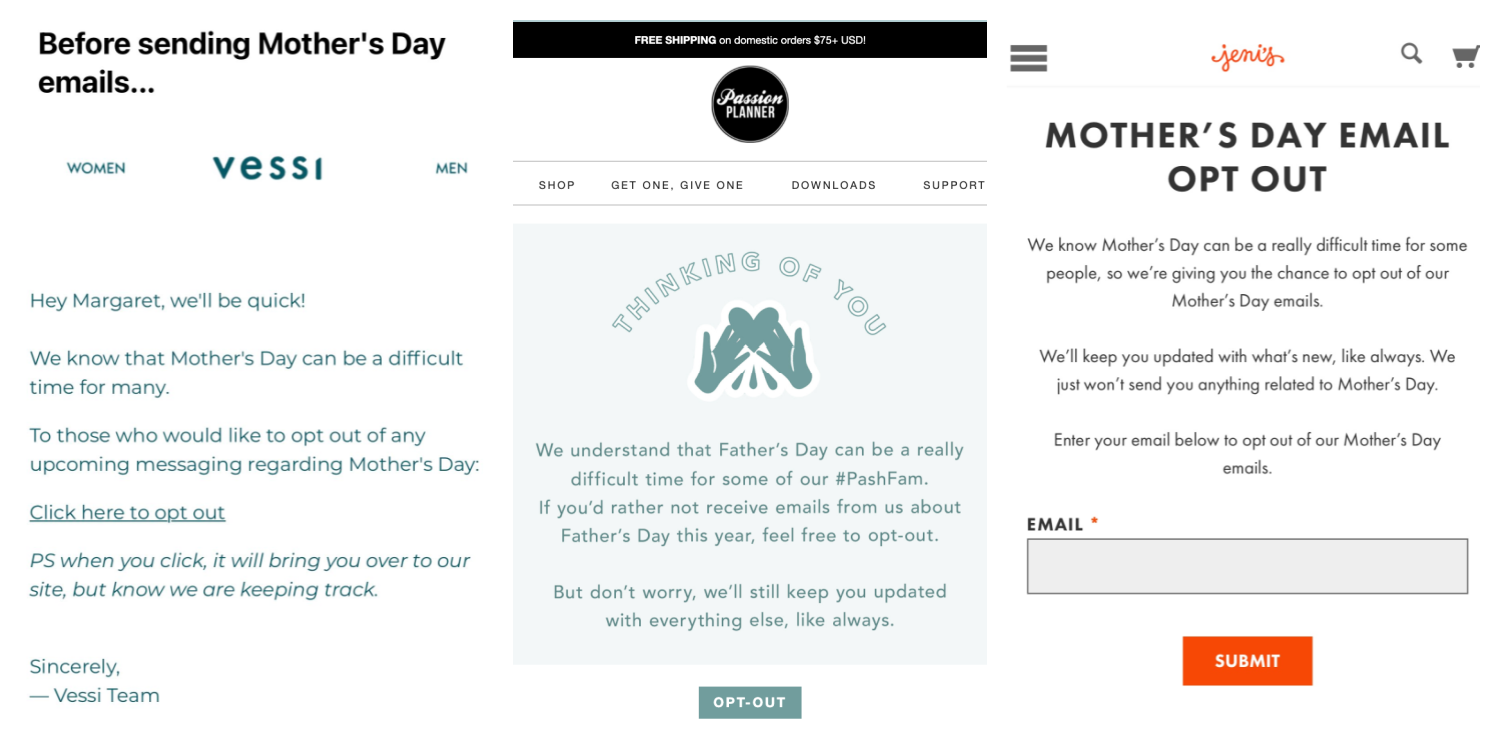 Whether it’s the 2 million single fathers in the U.S., the 40,000 two-dad households, or the 15 percent of men who are stepdads, fatherhood takes on so many different forms. A brand campaign is a great opportunity to be inclusive of and to draw attention to the different kinds of fathers and father figures that exist in our society.

One great example of an inclusive Father’s Day campaign is Gillette’s “First Shave” video which features transgender activist Samson Bonkeabantu Brown. The video shows a unique example of a son experiencing his “first shave” at an older age after his transition—because not everyone’s “first shave” looks the same.

Another inclusive example that specifically draws attention to stepfathers is Budweiser’s video that features stories from real-life stepchildren and stepdads, showing how each of them “stepped up” and changed the lives of the children they helped parent.

3. Is it making assumptions?

There’s also an aspect of inclusivity that involves expanding our definition of what a dad is. This isn’t the 1970s anymore, when six men (not six percent… literally six men) identified as stay-at-home dads. Brands can no longer make lazy assumptions that all dads are the breadwinner, like drinking beer, only watch sports, or don’t know how to change a diaper. It’s time to start portraying fatherhood in a way that advances positive values and resonates with modern dads—so before creating your Father’s Day content, make sure you aren’t being tempted by those familiar tropes and ensure that your content is true to your brand.

One example of a campaign that feels lazy is Yelp’s “Decks for Dads” contest. Yelp describes itself as “a website and mobile app that connects people with great local businesses”—and the idea is that people will use Yelp’s “Request a Quote” feature to submit a deck repair quote as their entrance to the contest. In our opinion, this one not only relies too heavily on the stereotype that all dads like to build things, but it also feels like it isn’t true to Yelp’s brand.

On the other hand, Dove has been a trailblazer in shifting the portrayal of fatherhood in advertising. The brand’s #DearFutureDads campaign spotlighted dads sharing their advice with new fathers on “the importance of bonding with their children in early childhood.” To take it even further, the brand created a Pledge for Paternity Leave and a Paternity Leave Fund to support dads who plan to be the primary caregiver in the early stages of their child’s life.

Want to see more awesome branded content in your inbox each week? Subscribe to our newsletter, #TBT.