What We Can Learn from the Best Branded Content of 2021

If you didn’t already know, Likeable sends out a weekly newsletter called #TBT every Thursday in which we share the latest social media news and platform updates, as well as spotlight a particularly impressive piece of branded content in each edition. At the end of each year, the newsletter team votes on all of that branded content for this annual blog post.

Drumroll please… Without further ado, here are the top 10 pieces of branded social media content from 2021—and, of course, something you can learn from each of them.

Earlier this year, personal care brand Native marked the end of its polarizing Pumpkin Spice Latte deodorant and gave the scent a snarky send-off with a 14-day self-roast on social media. Each day, the brand posted things like “Pumpkin Spice Latte’s dating app profile pic is with someone else’s dog” or “Pumpkin Spice Latte is ‘thinking about starting a podcast.’” The brand also let followers join in on the fun with the hashtag #PumpkinSpiceLatteGetsRoasted and shared some of the best roasts on its social channels.

The takeaway: Whether it’s on the sassy side like Native’s or more sweet and wholesome, finding your brand’s unique voice is absolutely crucial. And don’t be afraid to make fun of yourself! 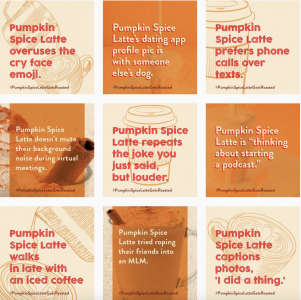 In June, Billie launched an Instagram campaign in honor of Pride Month that featured classic fairy tales rewritten to center the LGBTQ+ community. The campaign continued Billie’s efforts to foster inclusivity and empowerment for people of all genders and sexualities, and the brand will further support the LGBTQ+ community by donating a portion of their proceeds to The Trevor Project.

The takeaway: Launching a unique and creative social media campaign around events like Pride Month is great, but ultimately it means nothing if it’s not backed up by anything. Billie did the right thing by donating a portion of the campaign’s proceeds to a cause.

In April, IHOP released its new Steakhouse Premium Bacon with a unique sensory experience on the newly popular audio-only app, Clubhouse. Visitors to the brand’s official Clubhouse channel heard only the sound of sizzling bacon. As other platforms grow more crowded with advertising, Clubhouse offers a way to stand out and play with different kinds of creative—and IHOP’s quirky experiment did just that.

The takeaway: Hop on emerging networks, even if you aren’t quite sure how they work yet! Clubhouse didn’t quite stick in the way that some thought it would, but it’s still always useful to develop a presence on new apps as soon as possible since your brand will have more room to stand out among a less crowded advertising atmosphere. 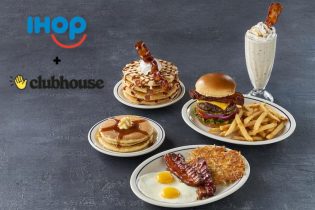 Alright, we have to toot our own horn a little bit, right? Ahead of its grand opening in July, Citrovia—an immersive outdoor installation featuring thousands of oversized, hand-painted lemons, leaves, and trees in a sprawling, fantastical citrus garden—launched its Instagram page with a grid full of bright, eye-catching photography and graphic design.

Following a big week in the headlines back in February (remember the GameStop stock market saga?), Reddit bought a five-second Super Bowl ad spot that was designed to make people pause their TVs. The ad was a photo of a Reddit post that celebrated what can happen when people come together.

The takeaway: Timing is everything, and production value doesn’t always matter. Reddit knew that, with the recent attention it had gotten, it needed to be in that Super Bowl moment where millions of people were tuned into a single event—and this ad got more attention than most of the other commercials that likely took months and millions of dollars to produce. 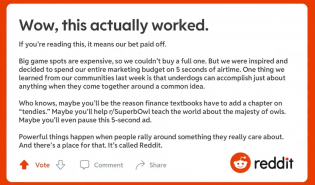 Through a collaboration with Spotify earlier this year, Barilla said “Ciao!” to overcooked pasta by creating a series of playlists designed to last exactly as long as it takes to cook the perfect pot of pasta—no matter the noodle shape. With people still doing all of their cooking from home at the time, these playlists were an innovative way to keep things fun in the kitchen.

The takeaway: Not only were these playlists entertaining and unique, but they were born from consumer insights like the fact that quarantine caused home cooking to increase and the fact that many folks like to listen to music while they cook. Plus, the playlists were actually useful as pasta timers. What more could you ask for?

This fall, TikTok creator Emily Zugay went viral for her purposely low-quality reimaginings of major brands’ logos. Zugay’s videos garnered over 54 million views, and brands such as Adobe and The Washington Post have responded. Perhaps the most notable response comes from TikTok itself, which replaced its profile picture with Zugay’s clock-inspired image.

The takeaway: At the end of the day, it’s just social media. Try not to take it too seriously! Emily was just having fun and doing what she loved, and now she’s got 2.2 million followers to show for it.

Back in September, Drake released the somewhat bizarre cover art for his new album, Certified Lover Boy, which features twelve different emojis of pregnant women. (We couldn’t help but wonder… was he taking the upcoming “Labor” Day a bit too literally?) Naturally, brands began recreating and putting their own unique twists on the image. Some of our favorites included Gopuff’s Certified Delivery Boy, NYX Cosmetics’ Certified Makeup Junkie, and Roscato’s Certified Wine Drinker.

The takeaway: Social moves so quickly, and you’ve got to be able to keep up. As soon as this meme started to take off, brands were concepting their own versions of it and getting to work on creating them. It’s important to plan ahead, of course, but don’t forget to save some resources for these real-time content opportunities. 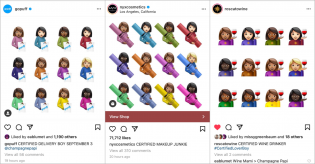 If you aren’t following Duolingo on TikTok yet, you should be. The brand had only 50,000 followers in September, and is already at 1.5 million in just two months. Why? They started featuring their owl mascot Duo in videos, hopping on trends and taking big risks that most brands would shy away from—and it has paid off. (As a bonus, the hosts of Likeable’s All the Social Ladies podcast interviewed Zaria Parvez, Duolingo’s social media manager! Check it out.)

The takeaway: It’s totally fine to try out a bunch of different things until you find what sticks—especially on TikTok. Initially, most of Duolingo’s TikTok videos were tutorials—but once they realized how popular Duo was, they completely leaned into that type of content.

And the winner is… Nick Jr.! To celebrate the 25th anniversary of Blue’s Clues in September, Nick Jr. brought back original host Steve Burns to give some closure to the now-adults who watched him back then. In a heartfelt video post, Steve addresses his abrupt departure from the show, shares fond memories of finding clues together, and thanks the fans for everything they’ve done for him. (No, we’re not crying—you are.)

The takeaway: Know your audience, and know what they want to see on social. Nick Jr. knew its Blue’s Clues content needed to speak to the millennials who watched Blue’s Clues back in the day, and the brand did just that.