What You Missed Last Week In Social: Twitter Super Follows, Dispo, and More

While we were all trying to process how it’s been an entire year since we entered our “new normal” last March, social networks were busy announcing new features and influencers were busy creating apps of their own. Take a look at the biggest social media updates from the past week! 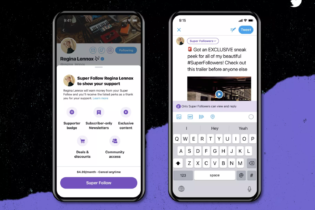 Twitter is adding another major new feature to its platform with a name that may or may not be borrowed from Tinder’s “Super Like” swipe. You can now “Super Follow” people on Twitter. Translation: Creators can charge their followers money to get additional content, such as private group access, additional tweets, or subscription to a newsletter.

Likeable’s POV: This update marks the first time Twitter is adding a monetary element to its platform and could be a factor into how the platform is used in the future. Historically, internet creators have focused on other channels to monetize their influence—especially YouTube, Instagram, Twitch, and increasingly TikTok—but now that there is money to be made, Twitter might see changes in user behavior. With words being the primary mode of communication on Twitter, we expect that personality-driven creators with loyal followings (both big and small) will emerge having the most super followers. Look for comedians and internet personalities to be the most common types of creative influencers on Twitter. In all, this is a big bet that Twitter is making that may or may not pay off. Because this is such a new direction for the platform, adoption by its users will likely be on the slower side—so only time will tell. 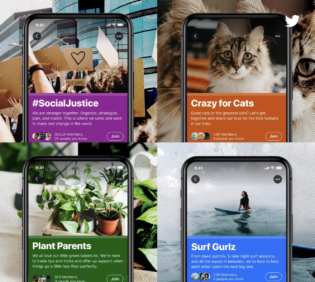 In addition to Super Follows, Twitter also announced a new feature called Communities—which is exactly what it sounds like. People can create and join groups around specific interests (cats, plants, social justice, etc.), allowing them to see more tweets focused on those topics.

Likeable’s POV: Facebook Groups have seen a significant increase in usage throughout COVID-19 and social distancing, with more than 1.8 billion people now using them every month. So, it makes sense for Twitter to show interest in developing a similar feature and creating its own take on Facebook Groups. It will be interesting to see if moderation becomes a problem in these groups (seeing as Twitter has had a history of moderation problems in general), but we do see Communities being a helpful tool for building online connections around shared interests. 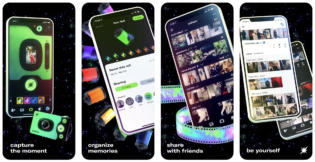 The concept behind the app is to recreate the experience of a disposable camera (get it?). Users snap photos that don’t “develop” until 9AM the next morning, and can then be added to “film rolls” for categorization and discovery. The company released an updated version of the app to the iOS App Store last Thursday that incorporates new social features, allowing users to share rolls as well as like and comment on photos shared by other users.

Since launching its invite-only test version of the app two weeks ago, Dispo raised $20 million in a Series A round of funding that puts it at a $200 million valuation. It currently sits at #5 on the Photo & Video charts in the iOS Store, and the company says it plans to release a version for Android at some point this year.

Likeable’s POV: In the age of Clubhouse’s simplistic approach to social audio, Dispo’s pared-down perspective on photo sharing feels like an inevitability. As major players like Instagram and TikTok continue to pile on new capabilities and features, a return to basics may be a refreshing change of pace for some overwhelmed users. Dispo itself has even started to receive some negative feedback on its latest version for adding social engagement options and redesigning the camera interface, so we’ll be interested to see what future updates have in store. 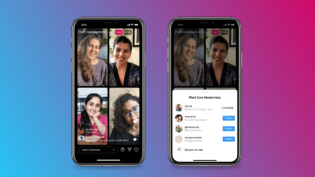 Speaking of photo-sharing apps, Instagram announced an update of its own. The network introduced Live Rooms, a highly requested feature that gives people the ability to broadcast live on Instagram with up to three other people. Previously, only two people could go live at a time. Instagram says it hopes Live Rooms will open up more creative opportunities, potentially allowing for things like live talk shows, more engaging Q&As or tutorials, jam sessions, live shopping experiences, and more.

The ability to add more guests to a livestream can also help a creator grow their follower base, as all the guests’ followers are notified about the Live Room as well as their own followers. Additionally, Instagram touched on the fact that the new feature gives creators even more ways to build a business and earn money. Building on top of the badges feature that was added last year, this most recent announcement noted that with Live Rooms, viewers can buy a badge for each host and use other interactive features like Shopping and Live Fundraisers.

Likeable’s POV: In the live video space, Instagram does face a number of competitors such as Twitch (for more niche content) as well as YouTube and TikTok. Audio apps like Clubhouse and Twitter Spaces also operate in a similar space, allowing fans to connect with multiple higher-profile individuals. However, with people seeking online communities and connection more than ever, we could very well see success from Instagram’s Live Rooms.

Want to get updates like these delivered directly to your inbox each Thursday? Subscribe to our weekly newsletter, #TBT.